The death knell for Dalston may have rung loudest when it became the destination for boy band birthdays , but for the most part, East London had long since lost it’s perceived ‘edge’ before the arrival of the Brit Awards ‘after party’ crowd. No more apparent is this fate than around Victoria Park where the deadly butch and Sundance pairing of ‘gentrification and families’ has eradicated any last decibels of 7am Julio Bashmore and frantic texting in the vein hope of buying something off a bloke called ‘party dave’ to keep the wolves from the door.

What this has resulted in is an area of expensive real estate, smugly populated by those who can live safely behind the walls of period property bliss, whilst knowing that under a mile away, someone, somewhere is playing out there misspent youth. People like to remind themselves and others of their wild side, but with age this comes in the form of exaggeration and mis remembrance, told with a pint of warm ale in the vicinity of where it happened, as opposed to actually hanging out where it is happening and facing the stark realisation that it wasn’t that great and you ain’t welcome.

What this has also resulted in is pubs like the Hemingway. 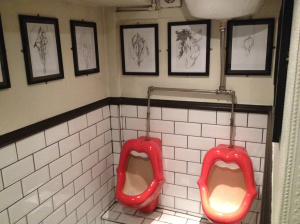 Standing boldly on Victoria Park Road, with the green painted exterior and distant outline of the park in the background the Hemingway screams ‘you’ve made it’. Not ‘you’ve made it’ in terms of reaching the fiscal heights that allow you in the deepest backrooms of Movida where you and other premiership footballers get to play ‘guess where the candlestick is?’ with 15 year old glamour models, more that you’ve finally made it past the point where you are bothered about things like whether you are too old for clubbing, or whether its wrong to watch re runs of quantum leap in your pants as a substitute for social interaction.

Accepting one’s age is an often overlooked rite of passage, nevertheless pubs such as this are where individuals can at least come to terms with it. What this equates to is the knowing touches of sombre colour schemes, clever menu’s and smatterings of taxidermy and the ubiquitous game of giant connect four taking place somewhere between friends who are tragically in love with each other. 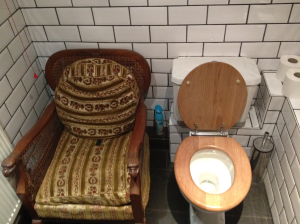 For the Porcelain Gentlemen, the toilets of the Hemingway are the zenith, this is an establishment that has invested time, thought and passion into its khazi’s.

Firstly there is the overriding sound of classical music; nothing offsets the sound of flatulence and cocaine abuse more than Bach or Mozart bringing it home.

Then there is of course, the tasteful drawings of genitalia, reminding the loo visitor of the gentle facets of their opposing sex and that whilst you are in the arena of sexual giblet misuse you have to remember just how fascinating and beautiful these body parts are.

Then there is the leading in hallway, compromising of maps of a forgotten and over romanticised time, when people paid the poor to go to the loo for them and everything including maps, was art.

Finally there is the large disabled toilet with baby changing facilities. Right next to the loo is a chair stolen from your granddad and then on the surrounding walls is pictures of women with gigantic erect penises. Once you digest this you grasp that this is inexplicably on the money.

The Porcelain Gentlemen: Given that toilets have their own genre of humour its interesting that they are often stark, austere and bland places lacking any sense of self. The Hemingway bucks this trend with an attention to detail that allows one to exit the loo with a beaming smile. Just try not look to happy, you’re still in a bog. 8/10.

This entry was posted on August 1, 2013 by alfielay in Pubs.