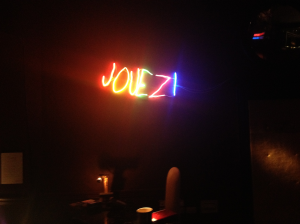 A time before Facebook, Spotify, the sub-prime mortgage crisis, the smoking ban….given what was to follow, 2003 almost seems like a golden age of innocence, a parallel time to the 1950s, when marriages were blissful institutions of entrapment, before the whole 60’s and 70’s thing came along and suddenly everyone believed liberal thought could acceptably be thrown into a conversation without rebuttal.

For the first time in history a generation has to face up to the fact that it will not be as successful as the last. The bell curve has shown its hand. The only way is down. Yet in 2003 it wasn’t this way. In 2003 graduates could leave university asking the world what it was going to offer them. Not only could they demand self-actualisation, but also a boss willing to breast feed them requisite industrial quips through the embryonic months of one’s chosen path whilst offering a starting salary fit for a corporate kingpin who could insist on fortnightly visits to the Balearics to throw money in the air as if in the final stage of the Crystal Maze.

What we are left with, to coincide with a career that may never elevate past internship, is a surrounding legacy of what went down. The parallels with a scene from a typhoon-ravaged village in the developing world are eerie. Yes the houses may not have been turned to rubble like their hurricane destroyed, third world counterparts, but property prices have made them comparably inaccessible. In both locations people must flee the village they grew up in to find shelter in somewhere that is willing to take them, whether that be on the grounds of ability to physically get there, or in the UK the ability to find enough of a deposit to buy a parking space.

But doom and gloom should not be the only narrative from the era of fiscal opulence and indeed whilst excess brings out the ugly, it can also bring out the pleasingly ridiculous. And so, to enjoy the lighter side of a time before it all went tits and see an extravagant establishment spawned in 2003 – I went to Sketch.

The site may be located in a grandiose Mayfair townhouse but any remnants of age old austerity have made way for the inner workings of an over zealous artist. Art is everywhere and in such an unpredictable fashion that, whilst endearing, it removes any suspense it could build: 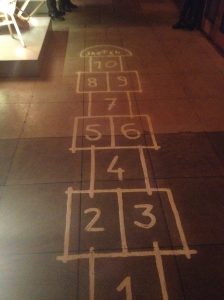 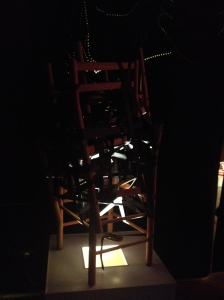 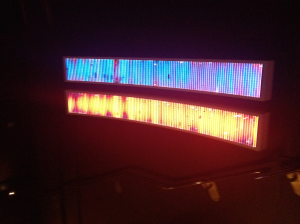 Upon entry into the Brassiere (no-one can afford the restaurant in the credit crunch era) one is faced with a room where no two items are the same; from the table, to the cutlery, to the multitude of water waiters nodding along as you shout wine requests to their rather shell shocked faces. Everything is given its own unique standing: the knife, the cup, the skirting board, much like the human psyche is its own demi-god. 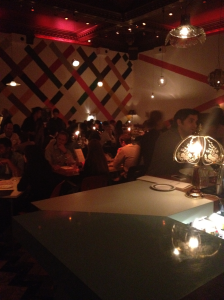 It’s hard not to be enthralled by the place, where opulent cuisine and pretentious Turner winning art come at you in a manner that presumes having all of this at once isn’t somewhat overbearing. And even the menu – a safe haven for words you recognise on a piece of paper the size of which should normally feel like a comfort blanket – comes at you with unfamiliar ostentation:

Cuisine on the menu itself reads like a metaphoric representation of the bygone ‘have it all’ era as it offers the opportunity to pig out on that bastion of fast food, the burger, whilst also fine dining on foie gras, in its oxymoronic ‘foie gras burger’.

But what to really make of it all? Well it doesn’t take the astute detective skills of Inspector Gadget to ascertain that it is all deliberately over the top, but perhaps, in a time defined by banker bonus bashing, we have lost sight of the importance of extravagance. I sat back and pondered – is it better to eat barrel scrapings every night for a month and then, at its end, splurge unnecessarily on an evening of unbounded excess, or should one smugly eat M&S ready meals every day, not having to suffer the ignominy of feeling a pauper, but never getting to experience the palatial palate of a prince.

It’s the first one every time.

In modern cinematic times, shock value has become so thin on the ground that when one reads about it in film listings it takes the guise of some new found Amazonian species of frog, whereby only 2 have been found and both are impotent males. This hasn’t come from the madness of creative directors setting out to confuse us with wildly innovative script writing, but from films whose whole premise is based on its desire to disturb. Examples are numerous, but none are more pronounced than that of The Human Centipede, a film, as I can recall, about a crazed tailor hell bent on creating a three piece suit stitched from rim jobs.  But one should not let this detract from big screen moments of true awe, where the shock is presented in a format so seismic, that one need not ask the room ‘did you just see that?!’ because affirming it through consensus is an insult to its very essence. Again, there are numerous examples, but for the Porcelain Gentleman, few are more inspiring than ‘Aliens’, a set of films so cavalier in its approach to structure that it decided to introduce some of the film’s main adversaries not from stage left but through someone’s chest.

Thus when you sit back and truly decipher how to make a toilet experience memorable, basing them on a film that not only had the human race being overcome by an alien life form, but also being impregnated by them – it makes perfect sense:

But let me not ahead of myself get.

Firstly, one walks into these toilets up a flight of stairs into a decadent bright white arena you almost feel like you are immersing yourself in a Kubrick film, or more realistically – Julian Clary’s house. The right staircase for women, the left for men, and at the top, a majestic room of such colour and obscurity it’s akin to the sanitation Sistine chapel. 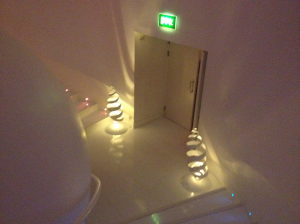 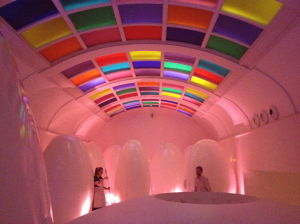 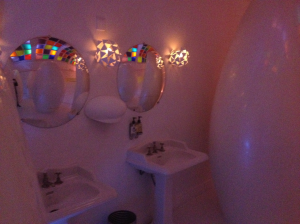 Then of course cometh the alien pods. To the sceptic it may look like a smattering of very upscale and warped portaloo’s, but that would be allowing pragmatism to cloud one’s imagination and thus be totally out of theme with the restaurant. 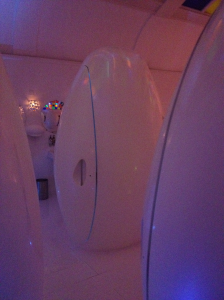 The thin blue strip of light draw’s you in from this museum of oversized larvae and then, once inside, one is cocooned in a dark blue reconstruction of a drained flotation tank. 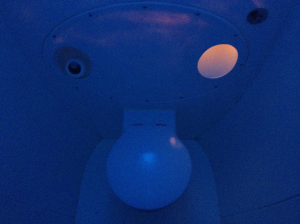 To compound the confusion there is some nonsensical chatter coming from a speaker I could not locate. The experience became akin to listening to Radio 4 whilst being gassed with nitrous oxide.

Returning to your table is the point at which one realises how much of this restaurant space has been dedicated to the toilet experience. Space that should ultimately be freed up and used for profit earning tables is instead used to feed the coal face of one’s imagination. It makes one rather wistful about the prudent nature of convention that has come with the compromised make up of modern austerity measures.

Insanity is often described as doing the same thing over and over and expecting different results. Looking around at this post credit crunch world, still full of people desperate to pay through the nose for overvalued houses and valueless degrees one wonders whether we simply are all nuts and will always continue to party long after we can afford to because somehow we believe a meritocratic society is one where everyone is rich.

But then again, when you look around at the brilliance of toilets made to look like the maternity ward for aliens you think – why bother being sane? 9/10

This entry was posted on November 29, 2013 by alfielay in Restaurants.