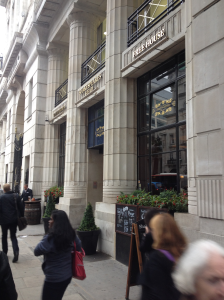 The Shakespeare’s head was once a famous pub situated just off Drury lane and frequented by actors and literary figures such as Charles Dickens. The writer Mark Lemon spent several years as the pub’s landlord and later founded Punch magazine, which he edited for nearly 30 years until his death in 1870.

In 1998, JD Wetherspoons took this pubs name, moved it round the corner and began flogging a whole roast dinner and bottle of wine for under a fiver.

To many this may typify the commoditisation and destruction of some sort of British cultural legacy but the Porcelain Gentleman isn’t here to demonise Wetherspoons, that’s as easy and lazy as kicking a granny, it’s here to understand.

The fact remains, whilst organisations such as RyanAir, Aldi and ‘Spoons might fly in the face of the nations persona about what is ‘right and propa’,  for vast swathes of the country decisions are made purely on price and value –  and going to the pub with £14 and coming out 8 hours later drunk and self loathing represents exactly that.

The Kingsway in Holborn  is hardly the territory for locals, everyone has the demonic look of someone very intent on getting home quickly, blanking their family and squeezing every last moment of their evening out on the sofa, before the alarm clock catapults them back to some Orwellian nightmare desk job. However, amidst this carnage the ‘Shakespeare’s head’ has the feel of a local boozer.

Perhaps inadvertently, and in spite of the homogenous décor across the franchise with its specific rules and regulations, all Wetherspoons have a local feel.

This place has the right mix of labourers, drunks, old people, despondency, sky sports, knowing laughter, nods about ‘the usual’ and snazzy chalk boards to emit the feeling of local, whilst also doubling up as a stop off for people having a final work drink before the suffocating embrace of the central line and another day passing where you fail to tell your boss that you wish to quit, and run a bakery in a Dorset village.

I glanced around, sat with an old lady in a green jacket (below) and realised that Wetherspoons pubs are set out simply as a reaction to what the people want. The lack of music used to confuse and annoy but now I appreciate not everyone wants to deal with the tireless conjecture of what is good music. 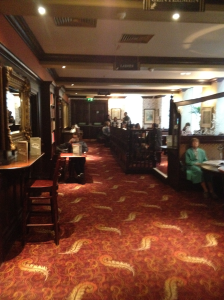 Rather than £22 on a mediocre roast in a gastropub, people prefer to pay pittance for a terrible one.

Cheap booze Deals in Asda  and the nations aversion to second hank smoke have killed the pub industry. Alas ‘spoons stands like Custer. Morally objecting to people drinking cheap own brand lager at home alone whilst morally ambiguous to the cheap alcopops it peddles. Thatcher may have said ‘there is no such thing as society’  but ‘spoons is taking a braveheart approach in its objection to this sentiment. If you are going to stare at the wall and work out your 5 point plan to fulfillment and enlightenment, let’s at least do it as a collective. Divided we may stand, but united we shall fall.

Say the words ‘Wetherspoons toilets’ to a crowd of people and you generally get the same reaction as if you said ‘Danny Dyer’. Shabby, brusk, overtly masculine..…a national institution for people who eat Rustlers.

In the ‘Shakespeare’ we could not all be more wrong.

Charmless they may first appear, but these toilets are far from shabby, with heavy wood doors on the stalls, immaculate sinks, crack free individual mirrors and a general use of discretion with regards to exposed pipes and fittings.

And then, whilst lathering one’s hands, the corner of your eye is suddenly awash with historical symbolism…..

You fully turn round and there it is:

I stood for a few minutes and looked at it as if I were a curator deciphering over what will be the collection focal point.

Now this may not have been some grand, framed piece like is placed outside by the kiddie highchairs (pictured below) but alas effort has been required to source, procure, measure and then put this up in the toilets, in a place few will see it and even fewer will admire. To some this may represent a massive waste of time, but to me they will have missed the key point; in life the best things done are not to momentarily please the masses, but to enthral the few that care. 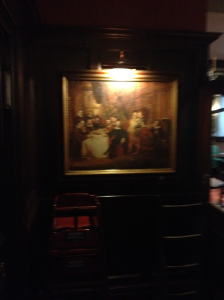 But the real enemy, as is often the case with battle, is not the one you can see firing at you, but is the one that sent you in to the trenches in the first place, based on some tenuous agenda; Ikea, interior design television, cheap supermarket lager, the general surgeon’s hyperbolic health warnings on tobacco – this altered the perception over why we still needs pubs and thus severed the demand.

‘Spoons may not be the panacea, but, at least it’s trying. A point exemplified by the efforts in the loo – 6/10