The supermarket is modern society’s pat on the back. A combination of complex global food distribution networks, diverse and varied consumption palates and forward thinking, almost intrusive, marketing ploys come together harmoniously in these cathedrals of gluttony as some level of reward for the fact that we no longer have to spear fish to prevent cannibalism.

Though not without their massive flaws – notably desolating the high street and breaking down small businesses and ultimately the fabric of local communities – supermarkets best epitomise the level of choice, attainable choice, we have carved out for ourselves and were the aliens to land, a guided tour round a supermarket might be the best way to get them up to speed on where the hell they are and what the inhabitants of the place do with 80% of their time and income.

At the micro level, supermarkets have understood the individual’s desire to straddle the confinements of their socio-economic standings with casual abandon, allowing patrons to become masters of their own persona, with posh ready meals and organic global produce when you want to profess some level of civility to your peers and Findus equestrian lasagne and reduced price lard when you are willing to admit that you are only ever two bad weeks away from vagrancy.

Frequenting a particular supermarket is in itself a sort of marker in the sand about who you are, who you see yourself as and whether you either pity the Jones’s or are in awe of their functioning plumbing and at a point where you have accepted defeat in keeping up with them.

But given the abundance of choice, which of these monolithic grocers’ emporia would best illustrate their shared approach to the water closet? The only reasonable choice was to seek out the supermarket whose all-conquering concept hums with the strength and reach of a singularity – those hulking aircraft hangars where the supermarket has simultaneously hit its zenith and nadir. Thus I packed away my cotton Waitrose Bag for Life and headed to the epicentre of middle America – Wal Mart.

Britain is a nation immersed in such a river of nostalgia that it’s almost as if we have forgotten what shoes look like that aren’t waders. Butchers that work in supermarkets are often taglined as having been poached from their own fledgling, local butchers shop at some stage as if this is a badge of honour and an assurance of quality as opposed to the script to some tragic play about social alienation and shattered dreams. Supermarket aisles often mock up as ‘real life’ setting for costermongers and their chirpy greengrocery but, beyond the realms of cut price booze and crisps, is imbued with  a hint of apology, as if they know deep down that whilst their minimum wage staff may know which aisle the jam is located in, the detail they know beyond that, such as where it is sourced and its organic credentials, is a myriad of pathetic information that they will one day be integrating into some hate mail to their boss.

In the US – where the ‘high street’ is some sepia toned picture postcode from prohibition-era Chicago, when people actually lived in cities and all you did was hang clothes on some perilously high washing line and shine your Tommy gun – there is no such need to make any sign of sorrow for its death. In fact, in most of the US, the supermarket is the high street:

This was what I parked next to. Parallel parking and pay-and-display need not apply.

Here there is no passing remark about potentially selling CDs, but an area that replicates a tented Virgin Megastore.

A small enclave of painkillers aren’t shelved strategically near the booze as an addendum to the well-trodden cycle that is your social life…there’s an entire pharmacy. 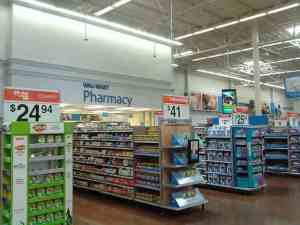 There is an in-house McDonald’s just in case you don’t think the trolley you are pushing is filled with enough of a calorific hurricane:

And simple things, like batteries, have been devoted their own mini-malls:

It’s actually not as intimidating as one may presume and the scale and audacity of such a place negates the hierarchical nature of the way supermarkets are scaled in Britain. Much like Amazon or Google, you can’t really have a theme or brand when you simply are the marketplace.

I am acutely aware that there are websites call ‘walmart people’ which mock the underclass and the ostensibly stupid in a way that mirrors the brutal fashion in which Britain castigates its white working class as ‘chavs’, but the Porcelain Gentleman doesn’t endorse this cyber bullying. Obese people driving a motorised cart with a bumper sticker that states ‘Born to Run’ are infinitely more interesting than the toned self-aware people who parody them. 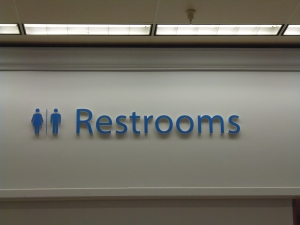 It has not escaped the Porcelain Gentleman’s attention that to others, the content of my reviews will at best be viewed as mildly eccentric but in reality seen as somewhat baffling and pointless. I take no offence at this, we live in an age of instant gratification and thus taking interest in the irreverent and finding beauty in the banal, is simply an impractical use of one’s time.

However, I have never viewed the careful glance at a polished bathroom handle, the caress of a handryer’s button, the photograph of a door’s timber panelling, as a security threat nor an affront to the values, ethics and democratic beliefs with which we so invest our collective conscience.

Upon taking my first photo of the toilets at Wal Mart (below) a chap asked me what I was doing. Before I could answer, a mental verdict had been passed….I was Julian Assange… I was Chelsea Manning…. as his stony Republican grip reached the top of my shoulder – I was Edward Snowden.

Now I shan’t ham up this extraordinary turn of events because if devil be in detail then the ridiculous is in the minutiae. The chap evicting me was most certainly in his 70s and clearly someone who had rolled his eyes at the actions of modern society enough times that me professing to be working simply for the point of journalistic satire was going to be a verbal fart in a vitriolic hurricane.

I pulled up my pride, mumbled the sort of sentence you get in a greeting card, and left.

Sitting in the car outside I suddenly felt remorseful for my apathy. What harm would there be to puncture the cordial nature of my British make up and simply ask why I was being turfed out? Am I the sort of person who would sit in a prison in Bangkok telling journalists ‘he said carry his bag over the border, I never suspected a thing I just assumed he had a bad back – perhaps I should have asked’ – whilst the world laughs and I serve 14 years?

Alas one must live by the choices they make so I never found out and just assumed he thought I was a pervert. Or a terrorist. Perhaps a perverted terrorist.

Never does one analyse what they are wearing more then when they are looking in the mirror and wondering if they look like a suicide bomber with a fetish for flatulence – Unscored.

This entry was posted on November 8, 2013 by alfielay in Retail.