It’s difficult to predict where the future will lie with the objectification of sexuality. Undoubtedly the backlash against lads mags, the slow removal of page 3 from the icy grip of white van men and the potential legislation that will force you to ‘opt in’ to having naughty websites and thus the worlds most awkward conversation with your mum/wife may all be viewed as some sort of step out of the dark ages. And yet, one wonders whether we are just turning into some town in Ohio where we are all in denial because the village elders said so.

A precarious subject area this certainly is, what with objectification unfortunately being the close sibling of exploitation in this family, though for a dose of pragmatism on the whole affair I suggest one goes for a ride on the London Underground for 20 minutes during peak hours. The incessant bashful glances, the horrendously awkward placing of hands on the poles and the utter despair on peoples face when that individual you have been eyeing up for the last 8 minutes gets off a stop earlier than you, is the clearest way to illustrate how much ‘it’ is on peoples minds.

Alternatively, for a far more post modern view on this subject, head to the U.S and go to ‘Hooters’. 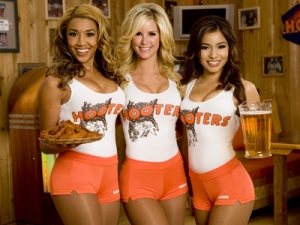 Hooters is a place where couples indeed some families, go to order cheap American cuisine and sip on milk based cocktails whilst being served by a well endowed lady clad in clothes which effectively are ‘exhibit A’ in what one does not want their daughter to wear. The atmosphere is so overtly friendly that you have to refrain from your tip being signing over the deeds to your house. Most saliently, the completion of the evening is often the purchase of a tight hooters t shirt/uniform which one get’s for their wife as to then allow the fulfilment of effectively 3 hours of light arousal to be done in your own home, in a consensual relationship within the confinements of the contract of marriage.

Substituting the waitress for your wife at the last crucial minute certainly isn’t romance in the way Keats intended and at face value is a rather depressingly kitsch and child like way to approach the wondrous and soul enriching act of making love, yet there is something to admire in such an approachable and amiable way to objectify the powerful force that is the sensuality of the fairer sex. There is a case to be made that this Disney Esq approach to objectifying beauty retains some level of innocence set amongst the backdrop of busting bosom, that coitus must be respected but can still retain humour and most importantly that the image of a pretty lady need not be completely removed of sanctity.

Predictably hooters and its merry dance are not located in St Tropez or Shoreditch or anywhere that has a sense of self, but are frequently in shopping malls, or in this particular case by a motorway near a cash and carry. The 6000 screens dotted around showing an array of sports (but only sports) perpetuate the crushingly sad generalisation that for men sex and sport have become almost interchangeable and inextricable. Consensus seems to dictate that men can no longer bequeath a fair maiden with a petal from the gods without envisioning themselves in shin pads, being egged on by a baying crowd and with a team of people dependent on the outcome.

The toilets were a let down, lacking any continuity with the décor outside, but in hindsight they were keeping in theme of reserved glamour model ethos.

You are greeted by some obscure message about your manliness, somewhat reinforcing how a real man wouldn’t continue sexual repression by frequenting such a place, then through this door you are faced with two lopsided urinals and some posters on the food deals on the gloopy mess they serve and some ubiquitous sports figure looking like a hero but actually trying to flog you home insurance.

It’s hard to know what I expected….some condom machines? an in-house pirate DVD salesman? I suppose the toilets somewhat typified the whole experience in that some level of sexiness was apparent to others but nothing felt very sexy.

The clue is in the name with ‘Hooters’, sexual prowess is an undeniable urge but also a point of light comedy – a breast may race your pulse and break your heart, but it also goes ‘honk’ or ‘hoot’ when grabbed in the correct way and approached with a certain attitude. This may in no way vindicate the sausage skin tight uniform that is mandatory or revolutionise how beauty is categorised but at least illustrates an alternative to the sticky pages of FHM and Nuts where so little is left to the imagination that teenagers need to add words like ‘dungeon’ to their normal internet searches. As the slogan on the t-shirt says ‘Delightfully tacky, yet unrefined’

Credit to hooters for continuing with this practice but alas in doing so, much of the budget was spent on the breast and little on the loo – 3/10. 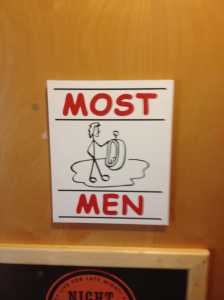 This entry was posted on September 9, 2013 by alfielay in Bars.