The most fascinating thing about Nando’s is where they are located, The Porcelain Gentleman suggests you look at this on line to understand the subtext. Yes there are some, indeed most, in faceless suburban shopping malls and down market high streets in provincial towns, but within the capital, Nando’s seems to have outlets in Shoreditch, Southbank, Battersea rise, Covent Garden, Bloomsbury, Chalk Farm, Stoke Newington etc etc. Granted this is not a shocking revelation for a successful franchise, but Nando’s appears to be situated in areas that have some aspiration of sitting within the goalposts of being either ‘upmarket’ or ‘trendy’.

Now this is certainly not the blog for outlining the psychology behind whether people are so post modern that they are at ease with establishments they view as a ‘guilty pleasure’ being bang in the centre of areas where they will be seen going in. However the geographical placing of these outlets which is done, one assumes, after careful market research, would suggest – ‘perhaps’.

Perhaps social mobility is not distancing yourself from chav culture but showing some sort of ease with it.

Perhaps generation Y doesn’t attach a stigma to where one eats, more an attitude to whether one cares where they eat.

Or perhaps we are all so skint now that we can’t even afford pizza express so we have to turn to Portuguese chicken in a gimmicky sauce.

Nando’s is like eating inside an idea that was on dragons den that you wish you had, but alas, you didn’t.

You queue and pay like in McDonald’s but the format of the menu allows some trace of belief you are in a legit restaurant.

You get your own drinks, cutlery and condiment’s like at school, but someone serves you the food. At your table. Enthusiastically.

You can leave anytime you wish as payment is upfront, yet you feel compelled to deliberate over whether to buy peri peri sauce to take home with you and recreate this magic.

You would never propose this as an idea for a date with a prospective partner in the initial rounds of courting. God no. Yet if they were to propose it to you (with a splash of irony but also a willingness to go) then you know you have met the person you should marry and procreate with.

Nando’s thus, is a great concept. It is often mocked as a ‘glorified KFC’ (or worse) but I don’t necessarily view that as a bad thing. We all from time to time need the gentle comfort and embrace of a sweaty burger with a speedy element to its service yet feel laden with guilt even if it is merited- Nando’s at least carries us through the valley of the shadow of death promising that all nutritional value is not lost and we remain decent human beings because we at least use cutlery. 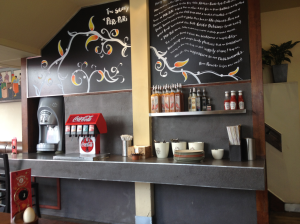 The first thing you notice is there has been some conscious effort applied. The generic, shelf bought ‘WC’ sign has been dismissed and replaced with hand painted signage.

The garish, chipped white tiles one expects inside a chain is replaced with a sleek, dark pebble dash effect. In a suburban cul de sac of middle England, pebble dash may well be the first warning sign that you should run, but in the context of Nando’s, it works. 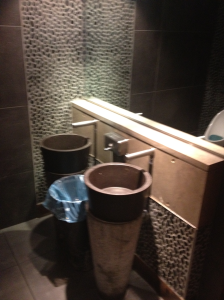 The sinks look like ceramic ice cream cones. Rather strange, and somewhat how I imagine an estate agent’s dream bathroom may look like, but again, it works. 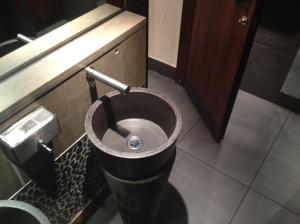 The stalls then cast aside the marbled steam room vibe and adopt a panelled wood effect. Of course! Lest we forget this is a restaurant encapsulating the essence of Portuguese settlers in Mozambique. Whilst one may not feel the easterly wind against their face as if on one of the timber panelled boats of Vasco de Gama, destined for Goa, stopping off at the idyllic ilha de Mocambique, the sentimentality, sprouted within the confines of the loo, is valiant in effort.

When the term ‘guilty pleasure’ crops up, my mind always used to drift to the look on my generation’s parents faces when we have just shown them the shanty we have bought for 20 times more than the mansion they bought in the 70’s – but now it belongs to Nando’s, as does my heart. 7/10 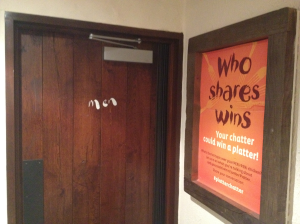 This entry was posted on October 4, 2013 by alfielay in Restaurants.